On Thursday afternoon, my friend and fellow piano teacher, Michelle, notified me of a free concert by Shad, a Canadian hip hop artist.

Born in Kenya and raised in Ontario, Shad is by no means a typical rapper. He holds a business degree from Wilfrid Laurier University and a MA in Liberal Studies from Simon Fraser University.  And he beat out fellow Canadian rapper Drake for the Juno Award for Rap Recording of the Year in 2011.  He has released 4 studio albums and the same number of mixtapes.

The free concert was hosted by CBC as part of their ongoing series CBC Musical Nooners, where local and international artists get one hour to perform on the CBC Plaza throughout the summer.

Funny thing was that the concert venue was right behind the Vancouver Public Library, so I’m pretty sure there was no “quiet reading time” during that hour!

After a quick interview, the concert started. 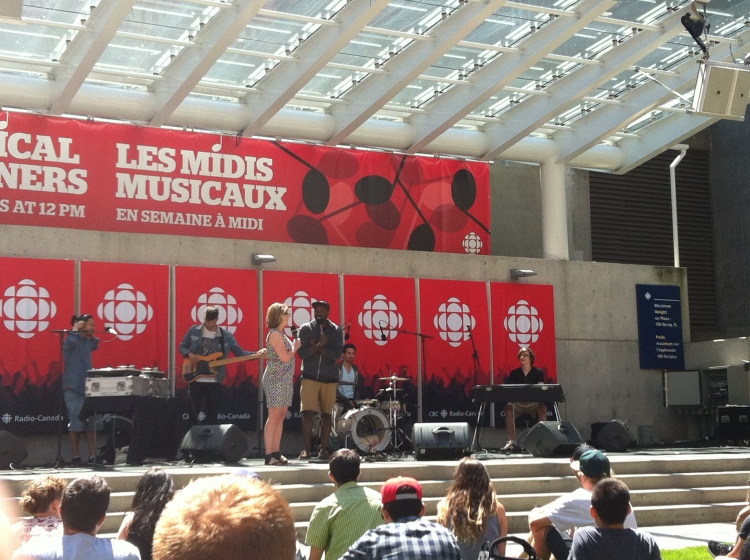 At first, there was only a trickle of people, but as the music blared during lunch hour downtown, it attracted more attention.

Shad rapped, sang (in falsetto sometimes), and even played on the electric guitar.

Shad recognized a fan in the audience and invited him up to the stage to rap one of the verses to his song. However, the fan loved the song so much he had made up his own lyrics, much to Shad’s delight.

For more info about upcoming performances at the CBC Plaza, click here.

One thought on “Lunch with Shad”

This site uses Akismet to reduce spam. Learn how your comment data is processed.